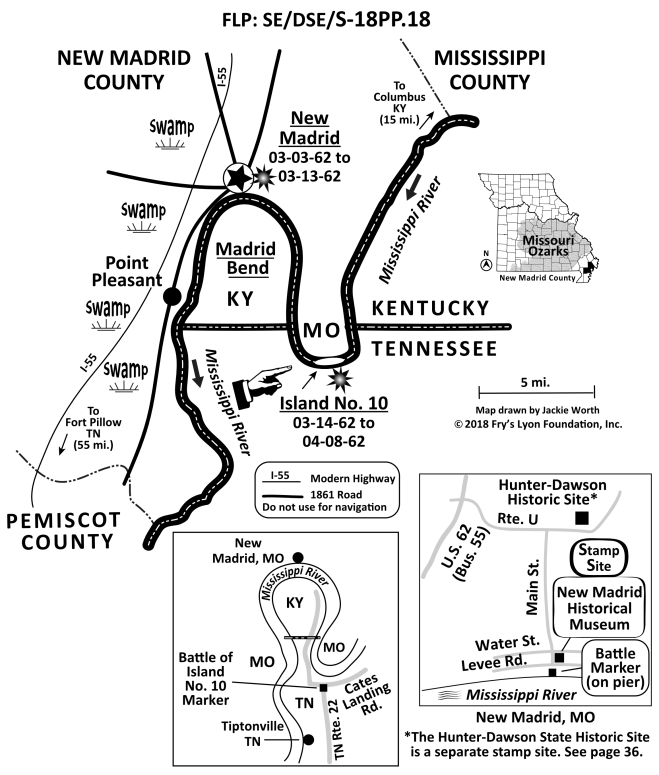 After Navy Admiral Foote’s gunboats made a daring run past the Confederate fortified island, the Navy protected the Army’s crossing of the river into Tennessee, allowing the Army to cut off supplies to the island. Realizing their situation was hopeless, the island’s 7,000 defenders surrendered to Admiral Foote’s flotilla on April 8, 1862. The Union victory marked the first time the Confederate Army lost a position on the Mississippi River in battle.

INTERIOR DEPT. SUMMARY: With the surrender of Forts Henry and Donelson, Tennessee, and the evacuation of Columbus, Kentucky, Gen. P.G.T. Beauregard, commander of the Confederate Army of the Mississippi, chose Island No. 10, about 60 river miles below Columbus, to be the strong point for defending the Mississippi River. Nearby was New Madrid, one of the weak points. Brig. Gen. John Pope, commander of the Union Army of the Mississippi, set out from Commerce, Missouri, to attack New Madrid, on February 28. The force marched overland through swamps, lugging supplies and artillery, reached the New Madrid outskirts on March 3, and laid siege to the city. Brig. Gen. John P. McCown, the garrison commander, defended both New Madrid and Island No. 10 from the fortifications. He launched a sortie, under Brig. Gen. M. Jeff Thompson, Missouri State Guard, against the besiegers and brought up heavy artillery to bombard them. On the 13th, the Confederates bombarded the Yankees to no avail. Since it did not appear possible to defend New Madrid, the Confederate gunboats and troops evacuated to Island No. 10 and Tiptonville. On the 14th, Pope’s army discovered that New Madrid was deserted and moved in to occupy it. A U.S. Navy flotilla, under the command of Flag-Officer Andrew H. Foote, arrived March 15 upstream from Island No. 10. The ironclad Carondelet on the night of April 4 passed the Island No. 10 batteries and anchored off New Madrid. Pittsburgh followed on the night of April 6. The ironclads helped to overawe the Confederate batteries and guns, enabling Pope’s men to cross the river and block the Confederate escape route. Brig. Gen. William W. Mackall, who replaced McCown, surrendered Island No. 10 on April 8. The Mississippi was now open down to Fort Pillow, Tennessee.

WIKIPEDIA BATTLE SUMMARY: The Battle of Island Number Ten was an engagement at the New Madrid or Kentucky Bend on the Mississippi River during the American Civil War, lasting from February 28 to April 8, 1862. The position, an island at the base of a tight double turn in the course of the river, was held by the Confederates from the early days of the war. It was an excellent site to impede Union efforts to invade the South by the river, as ships had to approach the island bows on and then slow to make the turns. For the defenders, however, it had an innate weakness in that it depended on a single road for supplies and reinforcements. If an enemy force managed to cut that road, the garrison would be isolated and eventually be forced to surrender.

Union forces began the siege in March 1862, shortly after the Confederate Army abandoned their position at Columbus, Kentucky. The Union Army of the Mississippi under Brigadier General John Pope, made the first probes, coming overland through Missouri and occupying the town of Point Pleasant, Missouri, almost directly west of the island and south of New Madrid. Pope’s army then moved north and soon brought siege guns to bear on New Madrid. The Confederate commander, Brig. Gen. John P. McCown, decided to evacuate the town after only one day of heavy bombardment, moving most of his troops to Island No. 10, abandoning his heavy artillery and most of his supplies.

Two days after the fall of New Madrid, Union gunboats and mortar rafts sailed downstream to attack Island No. 10. Over the next three weeks, the island’s defenders and forces in the nearby supporting batteries were subjected to a steady bombardment by the flotilla, mostly carried out by the mortars. At the same time, the Union forces at New Madrid were digging a canal across the neck of land east of the town to bypass Island No. 10. Several transports were sent to the Army of the Mississippi when the canal was finished, which provided the army with a way to cross the river and attack the Confederate troops on the Tennessee side.

Pope persuaded Flag Officer Andrew Hull Foote to send a gunboat past the batteries, to assist him in crossing the river by keeping off any Southern gunboats and suppressing Confederate artillery fire at the point of attack. The USS Carondelet, under Commander Henry Walke, slipped past the island on the night of April 4, 1862. This was followed by the USS Pittsburg, under Lieutenant Egbert Thompson two nights later. With the support of these two gunboats, Pope was able to move his army across the river and trap the Confederates opposite the island, who by now were trying to retreat. Outnumbered at least three to one, the Confederates realized their situation was hopeless and decided to surrender.

At about the same time, the garrison on the island surrendered to Flag Officer Foote and the Union flotilla.

The Union victory marked the first time the Confederate Army lost a position on the Mississippi River in battle. The river was now open to the Union Navy as far as Fort Pillow, a short distance above Memphis. Only three weeks later, New Orleans fell to a Union fleet led by David G. Farragut, and the Confederacy was in danger of being cut in two along the line of the river. [Source: Wikipedia]

History Net – What Happened to Island No. 10?