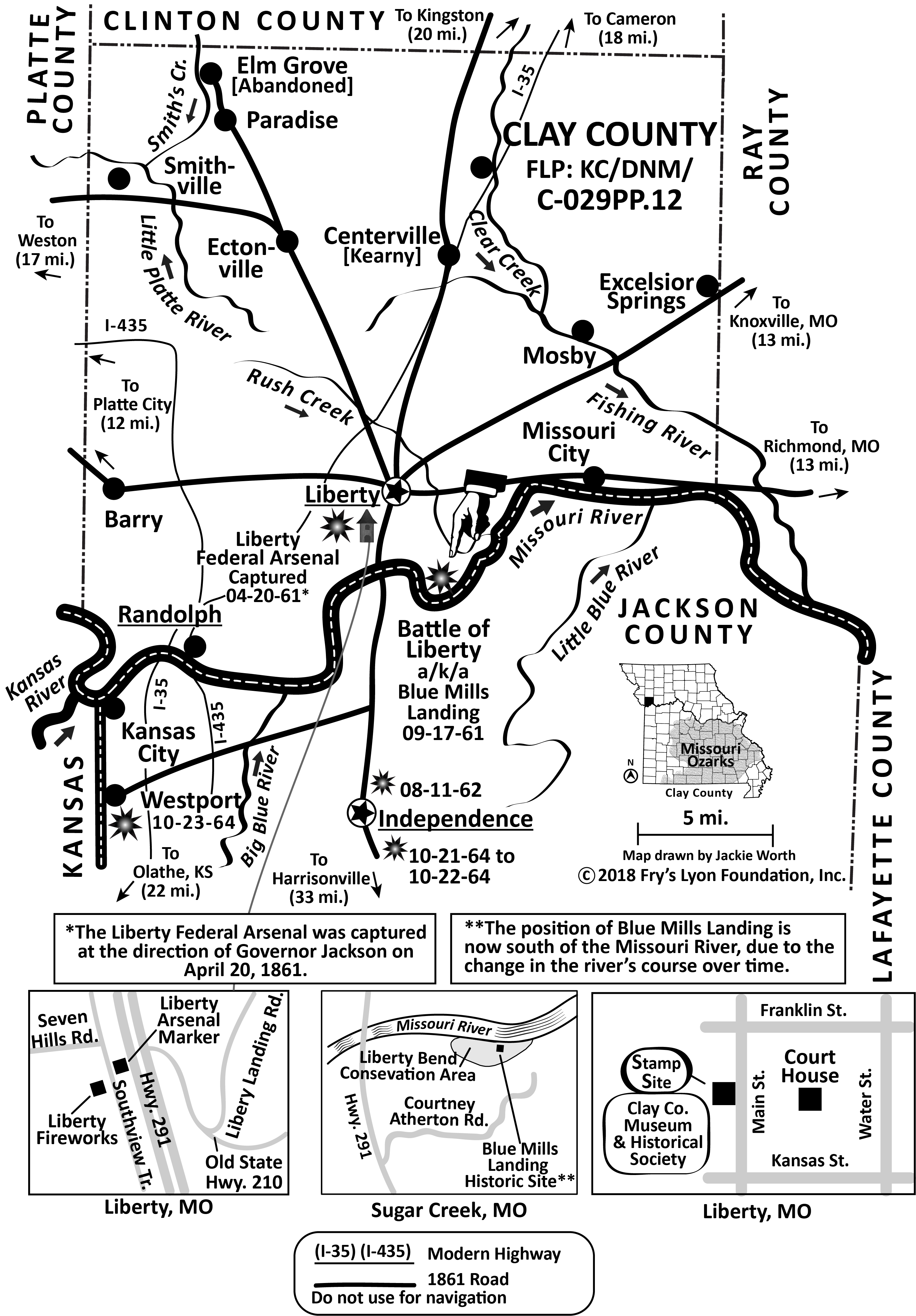 The Battle of Liberty (also known as the Battle of Blue Mills Landing) was an engagement between Union forces and pro-Confederate Missouri State Guard forces, south of the town of Liberty.

April 20, 1861: Liberty was the location of a federal arsenal, captured by local militia at the order of Governor Jackson*, shortly after the fall of Fort Sumter. It was the first armed action directed against the federal government in Missouri. *R. J. Holcombe, The History of Greene County, Ch. 2, page 144.

ADDITIONAL INFORMATION ON THE SEIZURE OF THE LIBERTY ARSENAL

The Liberty Arsenal (Liberty, Missouri), or Missouri Depot, as it was called by federal authorities, was forcibly taken on April 20, 1861 by an estimated 200 State Guard members from Clay and Jackson Counties, led by Colonel Henry Lewis Routt and Captain John H. McMurray. Only the arsenal’s caretaker, Major Nathaniel Grant, and two employees were present, therefore they were unable to stop the take-over. This intensified the anticipation of a larger-scale attack on the much larger arsenal in St. Louis by  secessionist-minded Governor Jackson and his state guard.

OFFICIAL REPORTS OF THE SEIZURE OF U.S. ARSENAL AT LIBERTY

Apr 21, 1861 Capt. Lyon to Frank Blair [Source: Peckham, Gen. Nathaniel Lyon: p. 107.] Letter Summary: Lyon reports his hands are tied by Gen. Harney, so he is unable to prepare for a proper defense. Advises the U.S. Arsenal at Liberty, Missouri, has been captured and those weapons could now be used to capture the St. Louis Arsenal. Notes that volunteers are being accepted to defend Ft. Leavenworth and he would do the same here except for Gen. Harney.

NEWSPAPER ARTICLES ON THE SEIZURE OF THE LIBERTY ARSENAL

Jun 22, 1861 · New York Tribune “Important From Missouri” [Summary: Gen. Lyon captured many Secessionist documents at Boonville; they contained information on past activities and orders issued by secessionist leaders, and a list of items seized from the Liberty Missouri Federal Arsenal.]

Apr 17, 1941 · Kansas City Times “The Second Attack of the Civil War–Liberty Arsenal” [Summary: An account of the Liberty Arsenal capture. Colonel Routt the secessionist leader was escorted to St. Louis for a military tribune. He was found guilty but given a pardon by President Lincoln.]

ADDITIONAL INFORMATION ON THE BATTLE OF BLUE MILLS LANDING

A new marker has recently been placed by the Alexander Doniphan Chapter of the Daughters of the American Revolution in partnership with the Clay County Museum and Historical Society and Liberty Parks and Recreation. Click on link below for more info and to read text of the marker. 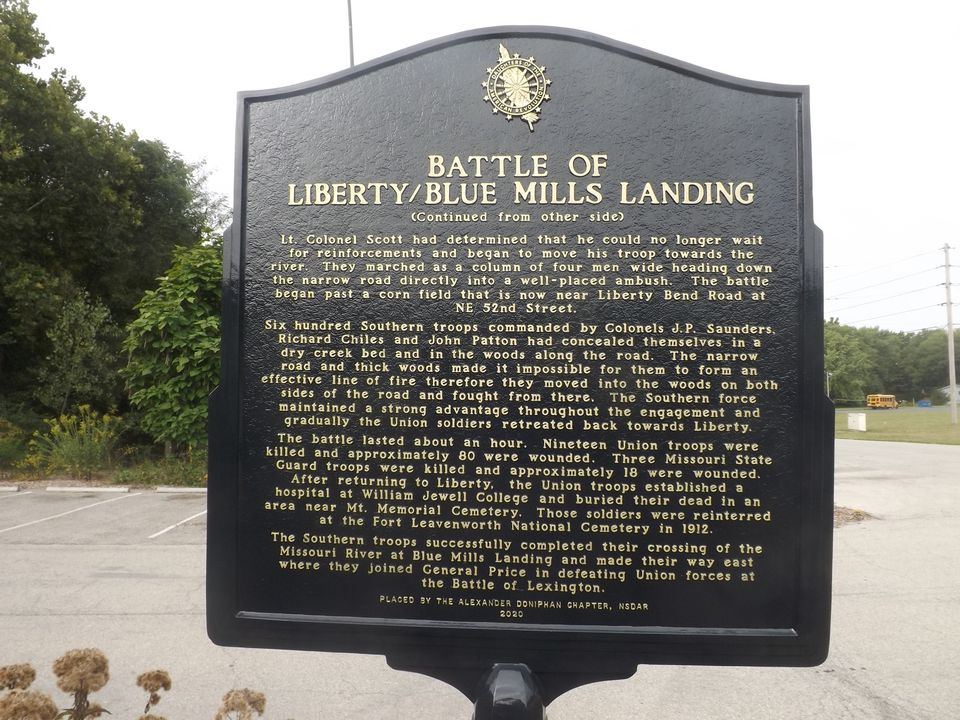 Light bands of Rebels rode over the country, killing and destroying unarmed ” Unionists,” before a regular force could overtake and punish them. Other bands of secessionists, engaged in the same assassinations — the same destruction of union men’s property, would suddenly disband, go to their homes and apparently be engaged in the most peaceful avocations on the approach of a body of federal troops.

Here and there, small bodies of union and secession troops would meet and fight a real battle, almost as if by accident. Such a combat was the affair at Blue Mills Landing, on the 17th of September, 1861. The engagement brought no special honor to Iowa soldiers, though it was fought by the Third Iowa with
determination and spirit. Lt. Col. Scott led 500 men of that regiment with a few Missouri Home Guards into an ambush that might have resulted in the massacre of the whole command. Once in, however, Scott and his men and officers fought gallantly, until by overpowering numbers they were driven from the field in confusion.

Blue Mills is only a ferry point on the Missouri river, not very far from St. Joseph. About the time of the capture of Lexington by MSG General Sterling Price, Scott with his Third regiment was ordered to march from Cameron to the town of Liberty, and there meet another column — the two to cooperate against a force of Rebels then retreating from St. Joseph and trying to reach Lexington.
Scott’s force reached Liberty on the morning of the 17th of September, but the other force had not arrived. Scott waited only till noon, and then, misled by reports of citizens, and becoming impatient to prevent further forces reaching the Rebels at Lexington, pushed on without the reinforcements into the dense woods and dry sloughs bordering the river at Blue Mills.

His advance was shortly surprised, and, with four men killed, driven back by a large force of the enemy. Scott had sent a courier to hurry up the reinforcements — but without waiting news of them, committed the fatal mistake of marching his column straight on into the enemy’s ambush. He had not even formed a line of battle, but marched in column by flank, and in a short time was surprised and overwhelmed. No line of battle was formed during the whole combat, which lasted for an hour.

The confusion and surprise made it impossible. Four thousand Rebels poured a hot fire from front and flank on the devoted little band. Its one cannon was soon useless. Ten out of sixteen of its commissioned officers were already shot. There was nothing to do but to retreat, though every man and officer had fought in a manner worthy of veterans.

On falling back to Liberty they met the reinforcements that might, with more caution, have made a victory instead of defeat. The engagement was improperly brought on, the men burning to obliterate the memory of the retreat from Shelbina a few days previously, for which Col. Williams alone had been responsible.

The fight at Blue Mills lasted a full hour, Col. Scott bravely doing his utmost to avoid defeat. Among the severely wounded were Major Stone, afterwards Colonel of the Twenty-second Iowa, and later Governor of the state; Captains Warren, Willet and O’Niel, and Lieutenants Hobbs, Anderson and Knight. John F. Lacey, afterwards Steele’s Assistant Adjutant General, was captured. Sergt. James H. Lakin received special mention for his gallantry in saving the colors, as well as Capt. Trumbull, Lieut. Crosley and Abernethy, the Sergeant, who, with a few brave men, pulled the cannon away by hand. Seventy of the Federals were wounded, some of them mortally, and nine killed, according to Col. Scott. Company I lost four killed and twenty wounded in the action.** [1]

** The rebel commander (D. R. Atchison) reported officially to Gen. Price that about sixty of the Federals were killed and about seventy wounded.

OFFICIAL AFTER ACTION REPORTS OF THE BATTLE OF BLUE MILLS LANDING

NEWSPAPER ARTICLES ON THE BATTLE OF BLUE MILLS LANDING

Sep 23, 1861 New York Times “Battle at Blue Mills Landing” [Summary: Short report of the battle including a list of the casualties.]